Connect with the Knowledge Portal Network team at #ASHG19

Attending the American Society of Human Genetics Annual Meeting next week? We are too, and we look forward to connecting with you in multiple venues:

Posted by Maria Costanzo at 11:24 AM No comments:

Learn about the Diabetes Epigenome Atlas at this week's webinar

Because integration with other data types can bring more meaning to genetic association data and spark insights into disease, we are working to develop connections between the Type 2 Diabetes Knowledge Portal (T2DKP) and the Diabetes Epigenome Atlas (DGA).  Learn more about this effort in our upcoming webinar at noon EDT on Thursday, September 26. We’ll demonstrate the current and planned connections between the T2D Knowledge Portal and DGA, and our guest speakers Kyle Gaulton and Parul Kudtarkar from DGA will provide an overview of the data and tools in the DGA resource.

This session may be attended as an online webinar (connection information below) or in person at the Broad Institute in the Cascades meeting room (11031) on the 11th floor of the 75 Ames St. building. We'll record the session and make it available on the T2DKP and on the Broad Institute YouTube channel for future viewing.

We hope you will attend and bring your questions and suggestions!

All events will take place at 12 noon Eastern time. We will send more details about each webinar as it approaches. 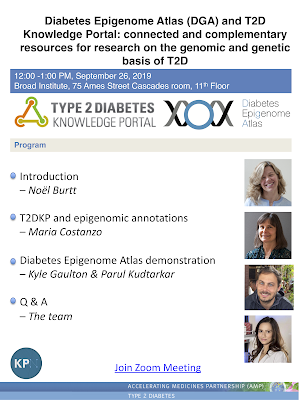 Posted by Maria Costanzo at 10:31 AM No comments:

Learn about the T2D Knowledge Portal at #EASD2019

The Type 2 Diabetes Knowledge Portal team will be exhibiting next week at the European Association for the Study of Diabetes (EASD) conference in Barcelona. Please stop by our booth (M07) to get a hands-on tutorial and let us know which data and features would be most useful to your research.

We'll have team members there both from the T2DKP Federated Node at the European Bioinformatics Institute (EBI) and from the AMP T2D Data Coordinating Center (DCC) at the Broad Institute.  The Federated Node allows data that may not leave Europe due to privacy regulations to be queried remotely and securely via T2DKP tools and interfaces. Researchers anywhere in the world may browse and query data from either location, without even needing to know where the datasets reside. Stop by the booth and talk with us about adding your results to the T2DKP! 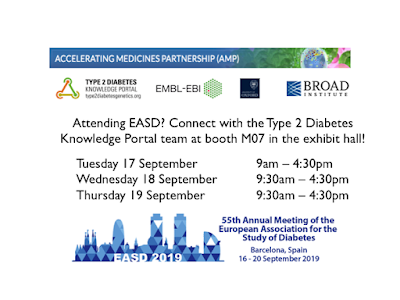 Posted by Maria Costanzo at 12:49 PM No comments:

A new edition of our periodic newsletter is now available. Download it here for the latest news about T2DKP data and features!
Posted by Maria Costanzo at 3:07 PM No comments:

Using the LoamStream genomic analysis pipeline, developed by the T2DKP team at the Accelerating Medicines Partnership in Type 2 Diabetes (AMP T2D) Data Coordinating Center (DCC) at the Broad Institute, we have re-analyzed several sets of individual-level genetic association data that were generated by AMP T2D collaborators:

The LoamStream software allowed T2DKP analysts to run these analyses rapidly, determining associations for many more phenotypes than were analyzed previously, and to use standard, state-of-the-art methods so that all of the results are comparable across datasets. Each dataset was analyzed for associations with glycemic, lipid, renal, anthropometric, and blood pressure phenotypes, and in addition, the type 2 diabetes cases in the BioMe AMP T2D GWAS set were analyzed for associations with three diabetic complications: chronic kidney disease, end-stage renal disease, and neuropathy. The Loamstream pipeline generates detailed Quality Control and Analysis reports, which may be downloaded from the dataset-specific sections of the T2DKP Data page.

Results from these re-analyses are integrated into the T2DKP and may be viewed on Gene and Variant pages and in Manhattan plots. They may be searched using the Variant Finder, and the individual-level data from the GWAS sets may be securely accessed for custom association analysis using the Genetic Association Interactive Tool (GAIT) on Variant pages.

We have also incorporated summary statistics from several studies into the T2DKP, including:

Although the genetic association results in the T2DKP identify sequence variants that are associated with the risk of developing T2D, it is rarely straightforward to identify the genes that are responsible for these associations, and in which tissues they act. Making connections between variants, effector genes, and tissues is essential for a better understanding of disease genes and pathways and for the development of new therapeutics.

To help researchers make these connections, we are assembling a toolkit of cutting-edge computational methods and applying them across all of the data in the T2DKP. The methods integrate GWAS data with transcriptomic data, tissue-specific gene expression results, eQTL data, and more to predict the probability of associations between variants, genes, phenotypes, and tissues. We present these results in interactive FOCUS (Find Orthogonal Computational Support) tables.

We previously added to the Gene page a Gene FOCUS table that presents results to help researchers evaluate candidate causal genes around a genetic association signal (read our blog post describing this interface). Now, we have added a Tissue FOCUS table presenting results that can suggest which tissues or cell types may be relevant for a disease or trait of interest.

The table is currently accessible via a link on the home page: 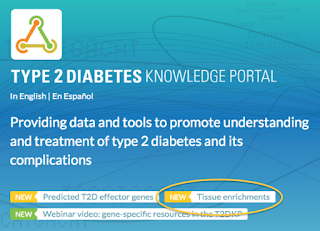 To use the table, choose a phenotype of interest to see p-values for different tissues, denoting the significance with which variants associated with that phenotype are enriched in each tissue. The methods used for these predictions are DEPICT, GREGOR, and LD score regression (LDSR). Find complete details about the table and methods in our downloadable documentation.

Improvements to the custom burden test

Some sequence variants are biallelic or multiallelic: that is, the reference nucleotide may be substituted by two or more different nucleotides or indels.  Previously, in the custom burden test (found on T2DKP Gene pages) these variants were treated as a single allele. Now, the software underlying the custom burden test has been updated so that it treats multiple alleles separately, offering the ability to choose whether each allele of a multiallelic variant should be included in or excluded from the custom burden test. Stay tuned for other major improvements to the burden test, including the ability to use several different aggregation test methods, coming to the T2DKP in the near future!

Continuing with our series of short videos documenting various features of the T2DKP, we are releasing a new video that describes the interactive table of predicted T2D effector genes. The recording of our most recent webinar, covering gene-specific resources in the T2DKP, is also now available. Links to both videos can be found on the T2DKP home page and Resources page, as well as on the Broad Institute YouTube channel.

Join us for our next webinar on Thursday September 26 at noon EDT! We'll announce the agenda and connection information in this space in the coming weeks.
Posted by Maria Costanzo at 11:51 AM No comments:

Join us at noon EDT on Thursday, July 18 for an interactive workshop featuring gene-specific resources in the T2DKP. We’ll first cover two new types of information on T2D gene associations: predictions of T2D effector genes, and gene-level T2D association scores. Then we'll delve into the Gene page with its comprehensive information for T2D and many other phenotypes, focusing on how the T2DKP can help researchers prioritize genes within a GWAS locus for further investigation. See below for the agenda.

This session may be attended as an online webinar (connection information below) or in person at the Broad Institute in the 415 Main St Board room (mezzanine level), where lunch will be provided.

We hope you will attend and bring your questions and suggestions!


Posted by Maria Costanzo at 11:32 AM No comments:

Today, in a new release of the Type 2 Diabetes Knowledge Portal, we present a distillation of many years of work from the global T2D research community: a list of the genes most likely to represent effectors for the development of T2D, based on a heuristic developed by Anubha Mahajan and Mark McCarthy that takes into account a variety of genetic and genomic evidence.

Identifying such candidate effectors is the goal of the Accelerating Medicines Partnership in Type 2 Diabetes (AMP T2D), established in 2014. AMP T2D brought together stakeholders from government, academia, and industry in order to speed up translation of genetic data into insights about disease mechanisms and drug targets. The generation, aggregation, and analysis of unprecedented amounts of data in this collaborative effort has spurred efforts to develop methods for the systematic integration of data (see for example Fernandez-Tajes et al., 2019).

Now, by prioritizing and integrating multiple sources of evidence, Mahajan and McCarthy have classified genes according to the likelihood that they are involved in development of T2D.  The sources of evidence that they consider include genetic association data; functional genomic data such as eQTLs and chromatin conformation; mutant phenotype evidence from model organisms and knockdown screens in human cells; and other evidence gathered from the literature. The heuristic is described in detail in downloadable documentation.

Today's release of the T2DKP includes an interactive table that displays these classifications and allows you to view and explore all of the evidence underlying them.


When viewing this list, several caveats should be remembered. These are predictions only, and the strength of the predictions varies considerably among genes in the list. Also, any heuristic has limits, especially those developed in the absence of a clear "gold-standard" set, as this one was. Still, we hope that this list will be a valuable resource that can help suggest or support experimental directions for T2D researchers. We welcome feedback on the heuristic and the interface. Over the next year we plan to develop software to facilitate the generation and updating of these results.


All of these datasets are described fully on the T2DKP Data page.

Another new feature of today's release is that a link to standalone versions of our custom association analysis tools, the Genetic Association Interactive Tool (GAIT) and the Custom burden test, is now available on the Analysis Modules page. Both of these tools securely access individual-level data to compute on-the-fly genetic associations using custom parameters. GAIT, for single-variant association analysis, was previously only accessible on Variant pages; the Custom burden test for computing the disease burden across a gene was previously accessible only on the High-impact Variants tab of Gene pages.

Finally, today's release includes a new instructional video that leads you through the features of the T2DKP Variant page. The video is listed on, and linked from, the T2DKP Resources page.

Check out our latest newsletter for more details about these and other recent additions to the T2DKP.
Posted by Maria Costanzo at 12:06 PM No comments:
Older Posts Home
Subscribe to: Posts (Atom)